We are all caught up in our own worlds... 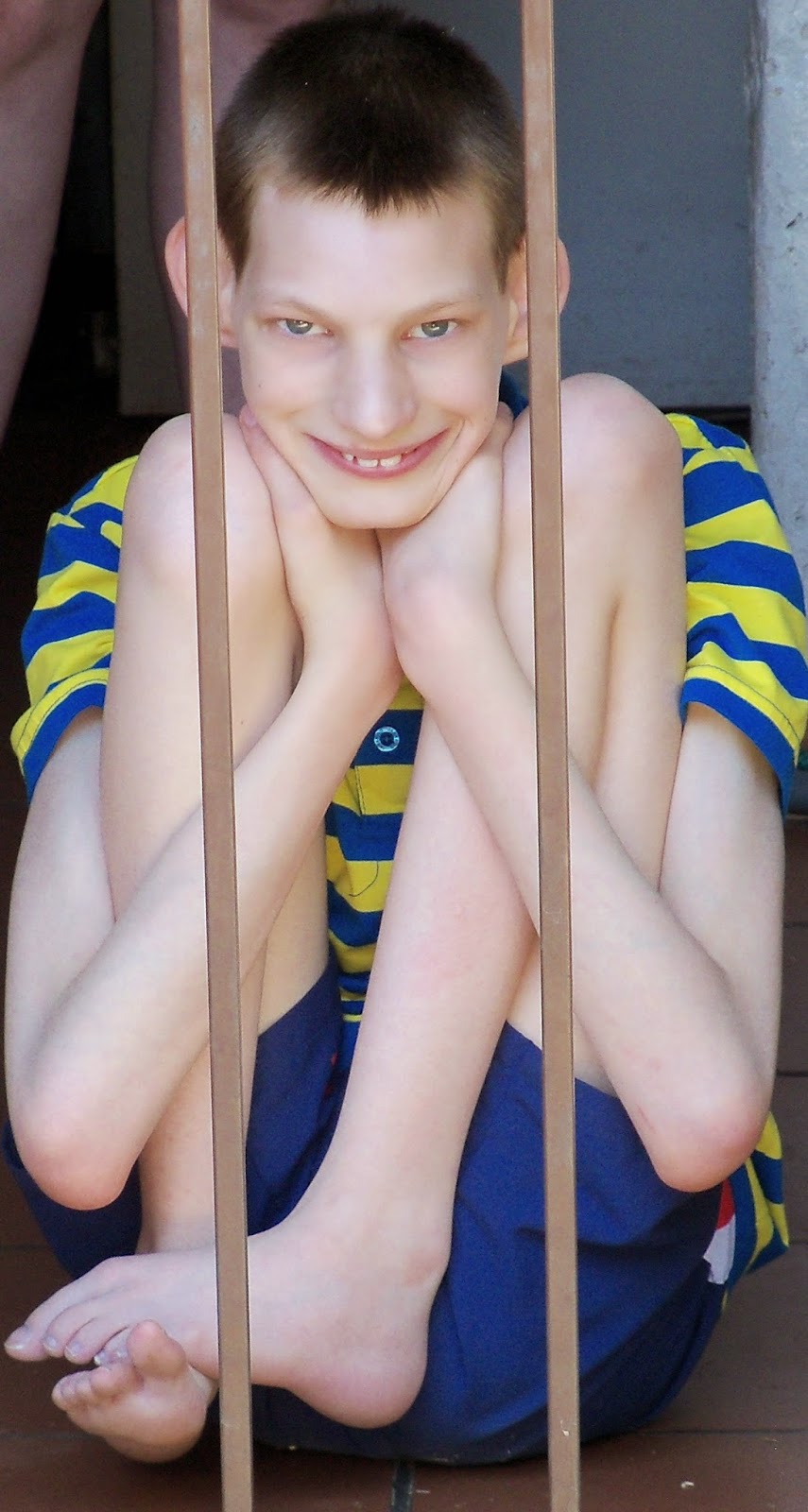 It is Stiaan’s birthday today.  Sweet 16.  Pretty normal thing for most kids to get excited about, isn’t it?

So we know.  Not sure if he will ever understand the concept of birthdays.  Irma will go fetch him this morning in Kempton Park and then they will pick Martin up from school.  Tonight we will open presents!  He will act surprised.  We will all smile and take happy snappies!

16 years ago Stiaan was born in Clinton Clinic.  Premature at eight months.  It was the same night when I returned from hospital that I was almost attacked / hi-jacked as I got off the highway at about 3 AM .  Fortunately I saw the bastards running up to me and there was no other traffic around so I made sure I got home very fast.  But this story is about Stiaan, not me.  I could not wait to share the news so I ‘phoned my late mum-in-law up at that time of night and told her that she had a new grandson.  I told her that Irma was OK and that Stiaan was OK.  There also was a lot of not-so-OK-stuff I did not know about at that time that I could not tell her.

I knew he was very small at birth but I thought that was simply because he was prem.  I had a concern about his malformed toes but the pediatrician assured me it was nothing to worry about.  Those were the immediate worries.  If I only knew then.

During the next few months we were introduced to worlds only other people live in.  One of the new worlds was that of people who have constantlly ill children.  It was difficult for us.  We did not understand.  We had no issues with bringing up Martin, Stiaan’s older brother.  Like khakibos.  It grows.  No issues.  Not that Martin is khakibos.  He is exactly the opposite thereof.  What was wrong with Stiaan?

Stiaan would not suck.  “Suck or starve”, the pediatrician told us.  He would not suck, and we would not let him starve.  So we fed him with syringes.  Every few hours.  He was crying all the time.  We did not know what to do.  Many a time he would fall asleep on my stomach, with Irma waking up in a panic a couple of hours later and asking where he was.  Still on my stomach.  Sometimes I would let him gently slide off and let him sleep between us.  For the first six months of his life, and I’m not lying, Stiaan was more in hospital than at home.  We learned to pack his bags when we took him to a doctor as we knew he was going to be admitted.

While Irma was still on maternity leave I would drop her at the hospital and Martin at daycare in the morning, and go to work.  After work I would pick Martin up, go to hospital and pick Irma up.  We were not sure if we could trust the nurses feeding Stiaan with a syringe.  Not too many people have the patience to do that with a baby who is suppose to drink from a bottle.

When doing a first aid course many years ago the instructor told us that most people would on average get in a situation only once where they would need  to administer mouth-to-mouth.  One night I had my turn with Stiaan.  Good thing I did that course.

Another world we became part of is that of parents who have more than one pediatrician for their child.  Who in their right mind would want to do that?  Well, we did, but we only had two of them on our books while we had the account to settle of the first one.  We decided to get a second opinion.  Things changed immediately. At six months of age Stiaan was admitted to hospital for the last time – to this day!  The new pediatrician kept him there for about two weeks.  At that time we had a wonderful nanny taking care of Stiaan as no daycare close to us would take him in.  Once again, every morning we would drive from Crown Gardens to Linksfiled Clinic to drop her so she could feed Stiaan and take care of him during the day, then into the CBD to go to work.  In the evening back to Linksfield and back to Crown Gardens.  Up to this very day I can’t drive past the Linksfield off-ramps on the N3 without thinking of those two weeks.  During that time every possible test was run on him.  We had more specialists and laboratory bills from those two weeks than most people receive in a lifetime.  Then the results came.  And the phone call from the consulting rooms. “Doctor wants to see you”.

So, we became part of yet another world only other people live in.  We officially became the parents of a disabled child.  Denying was not an option.  The proof was there, black on white, on the results of the lab test we now have to send a copy to SARS every year as they still need proof every year that Stiaan’s chromosomal defect was not fixed.  I find this very funny, not only because he can't be fixed, but also because they keep accepting a document issued 15 years ago!  The same results we had to submit to the department of education to get Stiaan exempt from attending school when he turned seven.  The same results the doctor handed to us with copies from a medical text book from the 60’s describing his condition.  His condition was first described in medical journals by the same doctor who described Downs syndrome.  The text book copies were clear:  Stiaan had an IQ just enough to keep him alive.

It took a few days for this idea to sink in.  The first thing we were told was to change his formula.  Not S26 or the other stuff you buy in shops.  Some stuff I can’t remember the name of and you had to put in a special order at a pharmacy.  Yet another death sentence to the wallet.  And guess what?  The six months of constant crying stopped the moment we changed the formula.  The internet became our best friend.  We searched, saved and took in everything we could on Cri-du-Chat.  We ordered videos from Australia, joined support groups, and then we made a decision.

Despite all the new worlds we were living in, we were going to let Stiaan live in as much of a normal world as we can give him.

During the next ten years Stiaan was pushed to his limits with weekly physiotherapy, speech therapy, swimming lessons, attending a school for disabled during the day, coming home in the evenings.  At age of about ten years we decided to move him to a permanent home.  This was one of the hardest decisions we ever had to take.  Well, for me it was.  There were various reasons for doing this.  I guess the main reason is that that rest of the family was busy falling apart.  For ten years, all attention was on Stiaan, all the time.  Irma and I haven’t had a proper holiday since our honeymoon.  Martin was known as the kid with the disabled brother, the one whom was often teased at Sunday school and school.  Most of us were often greeted with “Hello, how is Stiaan?”  We had to bring the balance back into our lives.  We had to live again.

So where is Stiaan now?  Stiaan is in his happy place.  It costs us a fortune to have him at Casa Caritas, but so costs life.  He still can’t walk properly and sometime bum-crawl holes into new pants within a day, he still can’t talk but we understand his gestures (I prefer the word gestures to signs as he uses more than just his hands to indicate something.  In most cases it is a complete “show” of hands, face, sounds and body) and the few words he tries to say.  He is still on nappies and possibly will be for the rest of his life.  He has a wheelchair for outings to the zoo – we stopped taking him to shops long time ago.  Not because we can’t handle the stares and remarks of people living in a normal world, simply because we got gatvol of picking up everything he throws off the shelves!  He recognizes a few basic colours, some numbers, and he can “tell” you on which channel the TV is by looking at the logos.  He recognizes most animals and has gestures for them.  He recognizes Ho-Ho-Ho and can’t wait to open his “pakkies” on Christmas Eve.  He loves smiling and can put on a real act when asked to smile!  He loves watching scary late-night movies with Martin when he is at home, and always wants someone to play hide-and-seek with him.  He gets very excited when we go fetch him for a weekend but also make it clear that he is not always happy when we take him back.  He craves attention and we have to make sure we don’t plan anything else for when he comes home.  A “Stiaan”-weekend is a “STIAAN”-weekend!  He loves watching TV and will not move if there is cricket on TV.  If he is not happy with what is on TV he will make you understand that you must change channels until he finds something he wants to watch.  He has an army of teddies and other soft toys.  Each has a name and he remembers their names – and don’t dare make a mistake and call a teddy by the wrong name.  You will know it is the wrong name!  He will punish you by letting you call out all the names of all his teddies until you get it right.  He gets up early in the mornings and keeps me company while Irma and Martin still sleep.  He does not like our cats and dogs much but tolerates them – he knows what is good for him!  He loves playing with his teddies in the empty bath; he can sit there for hours on end.  He has a fine sense of humour and likes to be teased every now and then.  He also likes walking (not stalking) up to you, giving you a frightening “WHA!”

And where are the rest of us?  We are just fine.  We have a 16 year old baby we love to bits, the same goes for his 17 year old brother.  We know when to act scared when being WHA’ed, we know we are not the boss of the TV when he is home; we have a baby on nappies.  We have a baby who can’t feed himself and can’t eat solids - all foods need to be mashed.  We have a baby who likes to play and have fun with the other members of family.  We play hide-and-seek all the time.

It sounds to me like we are caught up in a pretty normal world, doesn’t it?